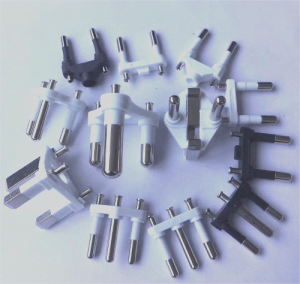 North American standard plugs are manufactured according to the National Electrical Manufacturers Association 1-15, 5-15, 5-20, 6-15, 6-20P, TT-30P plug standards. The plugs they make are fully certified by the National Electrical Manufacturers Association and Underwriters Laboratories. The plug standard in Canada is the Canadian Standards Association (hereinafter referred to as “CSA”) No. C22.2-42, an Underwriters Laboratory approved and CSA approved plug that can be matched with various sizes and types of cables, such as power servers, Computer data storage systems, network equipment and industrial equipment, where the standard 15A/125VAC plug is the most popular. North American standard injection molded power cords and plugs are commonly used by medical institutions and are easy to install, and we have a dedicated medical-grade plug system in our products. One side of the wire is an IEC-60320 connector with a rated current of 10A.

The pin of the Japanese plug is equivalent to the American standard plug of the North American NEMA standard. But in other respects, JIS 8303, the standard for Japanese plug manufacturing, adopts relatively stricter dimensional requirements, different marking requirements, and mandatory testing and approval by Japanese testing agencies. They require that the cable must comply with JIS C3306. Plugs and connectors require DENAN approval. PSE (Electrical and Material Product Safety), it should be mentioned that Japan has two power frequencies, 50Hz and 60Hz. When purchasing, you need to distinguish the power frequency you need to buy.

In Germany, Austria, the Netherlands, Sweden, Norway, Finland and Russia, the Class I grounding power plugs used uniformly are the CEE 7/4 and CEE 7/7 plugs, which are also called “Schuko”. This standard is very common throughout Europe, so we also call it the “Continental European” standard in our industry. There are two popular styles produced according to this standard, they both have two 4.8mm circular contacts with 19mm center to center and grounding is achieved by grounding clips on the side of the plug body. The CEE 7/7 plug also has a female socket that can be inserted into a French or Belgian socket with a male ground pin.

In addition, the plugs and pins produced by Green Electric are made of nickel-plated copper, and the plastic component is PBT 30% halogen-free flame retardant. There are two forms of hollow and solid. They are suitable for all standard AC plugs, covering Europe. VDE, American UL, South Korea KS, Japan T-MARK, Argenyan IRAM, Brazil BSA, British BSI, China CCC, etc., and also meet the PATH certification standards of ROHS and GSG. As a foreign trade supplier of electrical accessories from China, Green Electric has a very complete range of international products. There is a special point that they can rely on their own independent production department to produce customized products, and are also willing to accept ODM and OEM business cooperation , The price of goods is also very reasonable, and the service attitude is also first-class.